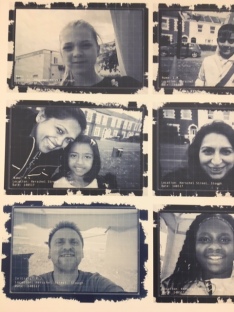 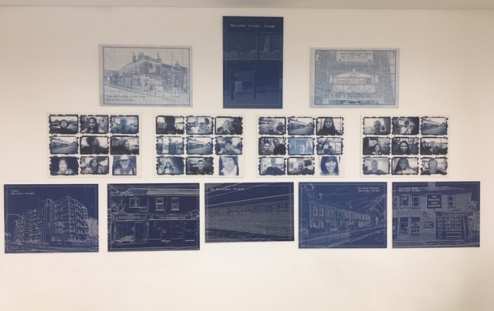 Herschel Street is an exhibition created by Slough based artist Anna Jones whose place-based work explores heritage and how people respond and resonate with their local history today.

Anna created this exhibition to encourage a sense of pride of place:  discovering, celebrating and sharing her home town’s currently under-valued cultural heritage. Herschel Street seeks to challenge the perception of Slough as a ‘new’ town, and less favourably as a place lacking culture and heritage.

Local residents and visitors out and about on Herschel Street were given disposable cameras to take ‘slow selfies’. These self portraits, that people would not see until several weeks and processes had taken place, explore how photography and our relationship with it changes over time.

A range of buildings on the street were photographed and re-created into ‘blueprints’ – their variety of use and architecture reflecting the diversity of Slough.

Herschel Street was exhibited in the Herschel Arms Pub and at the We Are All Made of Stars finale by Herschel Park. The exhibition is permanently in place at the Local History section of The Curve, Slough.

The street, just off the High Street in central Slough, takes its name from the Herschel family; 18th century Slough based pioneers who developed the modern mathematical approach to astronomy and made discoveries including the planet Uranus, infra-red light, comets, stars and nebulae.

Born in Slough in 1792, John Herschel took up astronomy in the town, building telescopes and cataloguing the universe with his father William Herschel and his aunt Caroline Herschel. They worked from Observatory House which once stood on the corner of Herschel Street and Windsor Road.

In addition to his pioneering work as an astronomer, in 1839 John Herschel coined the term photography within the European scientific community and was the first to apply the terms negative and positive to photography.

John Herschel also made numerous important contributions to photography and photographic processes, particularly in inventing the cyanotype, as a way of reproducing astronomical and mathematical notes and diagrams.

Cyanotype is a photographic printing process that produces a cyan-blue print. Engineers used the process well into the 20th century as a simple and low-cost way of producing copies of architectural plans, known as blueprints. The process uses two chemicals: ammonium iron citrate plus potassium ferricyanide that gives its deep blue quality.

Anna worked with Slough based artists Jordon Maynard Daley and Jan Morrisette Gernale on blue print creation and processing, as well as community workshops for participants to create their own cyanotypes as below.

Herschel Street was supported the National Lottery Heritage Fund and Arts Council England with thanks to Slough Council for Voluntary Services for their ‘dark room’.

This is a text widget, which allows you to add text or HTML to your sidebar. You can use them to display text, links, images, HTML, or a combination of these. Edit them in the Widget section of the Customizer.